3rd in the Belgian championship

Well, as I expected I finished third thus losing the title. I had estimated I would place at that place although I knew it would still be possible to win, although I knew Nicolas Farcy was in great shape.

The podium is the following

The podium I had predicted was : 1st Nico Farcy ; 2nd Loic Timmermans ; 3rd Me.
Well I got my objective right as I wanted to be on the podium, and knew third place was the most likely reachable for me.

Lest know analyse what happened. There were four blocs, 2of them were in overhangs walls, including one with a dyno(although some didn't climb it that way) and the two others were on almost vertical walls, with mantles.

I did the first problem onsight without any problem, as well as Nico Farcy and Jan de Smit. Loic sent too but second try.
The second one was looking rather hard, it involved a big wooden feature with a left heel hook on a rather sloppy pinch. I knew this one was going to be the one to send but only Nico Farcy sent it.
I made a big mistake thinking I could skip the bonus hold to directly dyno the next hold which was a jug. I felt a bit unconfident with my left heel-hook, and tried to jump but couldn't take the swing.
I think I made there a big mistake thinking I still had the strength to do such a move.
I would probably have been possible a year before but not this time and I over estimated myself.

Third bloc was a dyno that I sent pretty fast, as well as many other including Nico. At that point, Nico is the only one with 3blocs sent. Then follows Loic with two blocs and one Zone ex-aequo with Jan and then me with two tops. The last bloc would decide who would win, a perfect situation for the suspense...It looked pretty hard on the observation but I though no one could send it except Nico.
Surprisingly, Jurgen sent it as I heard the roar of the crowd. At that point I think that many would then send, especially when Jan also sends it.
At that point, I don't know it but Jan is first, Nico must absolutely send it to win, and I know that if he don't, I'll have to go for the title. When I understand he didn't do it, I know it's coming down on me, like last year, I can win if I top the last problem. I tried hard but found it really hard, not really understanding how the others climbed it but I know they somehow boycotted it but I can't figure how and thus climb it.

It's only after that Jan told me he went straight, skipping the whole problem by topping it out to the right, A mistake for the setting team but a mistake everyone could have taken advantage of, which only two people had the guts to. Jan announced he would go that way, I didn't understand what he meant when he told me, by winning his first big title, he proved guts was part of the experience and the key assets the rest of us missed that night. I'm glad I could finish 3rd anyway after almost a year of non-climbing due to an injury (with go worse after the comp though) but I am also disappointed as I made two big mistakes, each one of them if not made could have granted me the title.

I'm happy for Jan as he climbed really well, proving you can still win ahead of youngsters at 36. I'm disappointed for Nico who was clearly the strongest during the competition but missed the title for the second year whereas being very close to it.

Anyway, it's not that bad, I still feel capable of winning although my lack of training, my injury and sleep troubles so it's all positive. Although, I think I injured myself in the second bloc, trying to hold the swing with my right arm(the injured one) and now it hurts kinda badly...
I'm off for two weeks off now. I hope it'll get better as I'm really getting tired of climbing at 50%.
If not, I will slowly quit the sport to focus on something else, maybe something more intellectual.

In a week will take place in Gent the next Belgian championships where I'll have to defend my title.
It's been a long tome since the last post, and, considering how much I've been climbing recently, it does male sense.
Indeed, I haven't been really climbing for like(i don't know) since I spent my last summer in Magic Wood.
An inflammation in the elbow area is to blame for keeping me away from performance. I have been repeatedly annoyed by it, and, although it sometimes goes better, doesn't go that way most of the time. I have thus been climbing gently, and as I don't enjoy stagnation nor forcing me not to pull hard, I have been unmotivated and decided to stay away from the gym and focus on other things.

It will be a hard comp, many climbers seem to be in great shape and I know that if I want to win, I will have to give everything I have. I hope the problems will be well set and there wont be too many mantles haha.

Anyway I'll try my best with a freed mind so I hope this will increase my chances :)
Results in a week now.
Posted by Olivier Mignon 1 commentaire:

An other perfect time in the woods.

Well, my three weeks trip to magic wood is now over and I am back in town.
So many things to say about this summer, maybe I'll start about climbing. Climbing has now become to me something more that something I want to excel at, I must admit that I always had things in mind such as "Will that project go down,..."
I am now totally off that mood, I just want to climb when I feel that I want to do it, I don't care about getting stronger because it requires to much sacrifices, too much dedication and I am just not willing to do it.
So I did not climb a lot this trip and have preferred the social aspect. I had so much fun in the woods this time, meeting so many people, some amazing four Americans (they'll recognize themselves) I had great time with (YOLOOO) partying in the camp, going climbing drinking schnaps.
It's amazing that in such a place I always meet people that think like me.
Also had great time with the Finnish people here, always so kind as all fins are, thx Joonas and Anna for bringing your kindness here.

I wouldn't forget about the magic wood crazy team (Mischa-Bobi-Thomas-Science and the toilet guy aka me) really every time I come it's still the same, always enjoy this place so much, although after so many times, I have climbed a lot of things but I don't care because I don't go to magic to climb but to meet amazing people. Also want to thank Marion, my french friend Greg, all the people there who helped me in any way, Roman, the english who went shopping for me, the swiss guys, etc.

So I really think it is time for a new form of climbing in my life, a more detached to performance aspect way.
Also I had so much fun with my Belgian friends, Nico by whom I got the chance to meet more nice people, that I didn't know before, with whom I had so much fun (sometimes painful fun but still fun !) 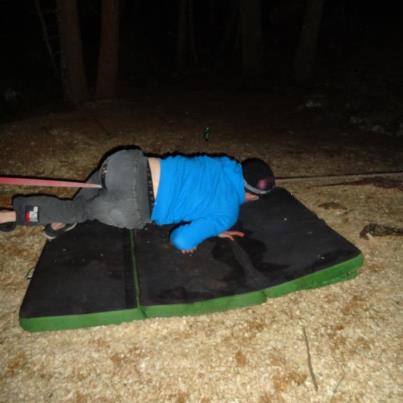 Just discovering I was not born to slack line, although I really tried hard on that move...

Although I did not send any of my projects, I had the best trip ever in my life, although there were moments I was kind of not feeling well, hard to know that there's an other reality out there which would eventually catch up with me.

So to talk about the climbing, I did not really tried hard on anything, I was doing good on remembrance of things past but there was one move blocking me and when I started to feel finally good, the trip was coming to an end. Also tried practice of the wild and this will be for sure the thing I want the most to try again because I only tried like a little hour and I could manage the last two moves very easily but I still need to work on some beta on the middle crux.
Still, I was pleased to try and feel like this 8C thing is really doable if I could commit a little more.

I did send "deep throat", adding an other 8B to my ticklist, It went at the third go and felt pretty good, although I was really close in it on my second trip to magic when I had to leave after having tried one session and an other small session when I had injured my bicep in the big move... 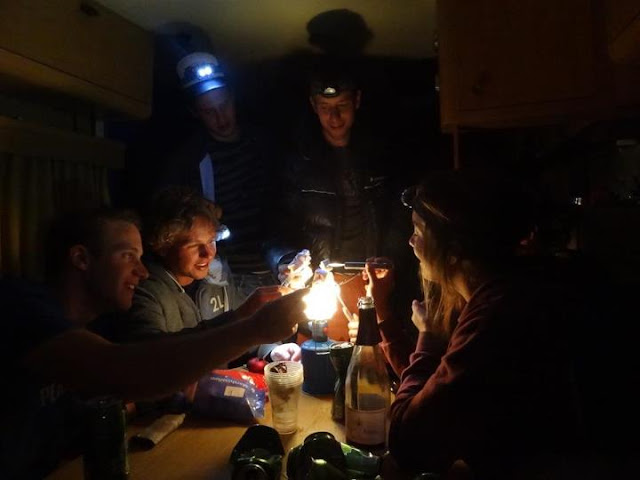 When a lamp finds itself an other use...

I don't have much more to add, I will come back soon in better shape so hopefully I can combine partying and climbing :p
This place is fucking great, and let me use the f word because none other word would suit better.

I just love the place and feel like I'm going to keep coming over the years because this is just the place where I feel the most happy, it's like if it had cast a spell on me...

Now is time to nostalgia, looking forward to coming back...

ps : new line behind octopussy boulder, nice 6C to the left named "lapinou" and 7B to the right dubbed "Quoi doigt". You can just go there past the octopussy boulder, go first path right then either go by a small tunnel or just circle the boulder, you'll see it easily, it's wall with a prow to it's right.
Posted by Olivier Mignon 2 commentaires: